The passport blank of the citizen of the Russian Federation has the following security elements, recognized by special devices:

A regular 3-tone watermark, by means of letters “RF”, over the whole page, which is visible with the help of ultraviolet devices. 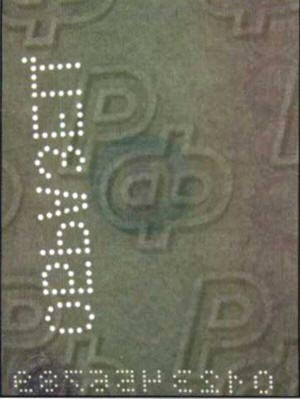 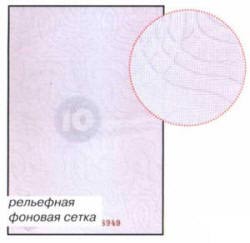 Between the pages 2 and 3 there is a special protective transparent (laminate) film (self-adhesive or non-self-adhesive). At places of the film adhesion on the left and upper edges of the photograph and on both sides from the passport binding on the inner side of the laminate film there are typographic images made by a special red ink, which in the process of stamp printing are put on paper / must be checked with the help of a magnifying glass for the gap absence in red lines along the photograph edges and passport binding. On a modified passport blank (2006) the laminate film has a holographic image with a motion effect (kinegram) – the Russian Emblem, the stars, and the inscriptions – “RF”, “Russia”/ can be visually checked.

These security elements are checked via special devices in UV illumination mode.
When illuminated with ultra violet rays:

The image on the first and the last page, which is visible in normal light, is only partly seen when studying the passport blank in infra-red light / must be checked via a special device in the IR security mode. 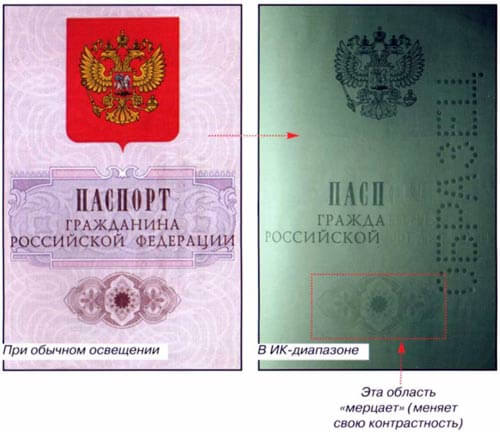