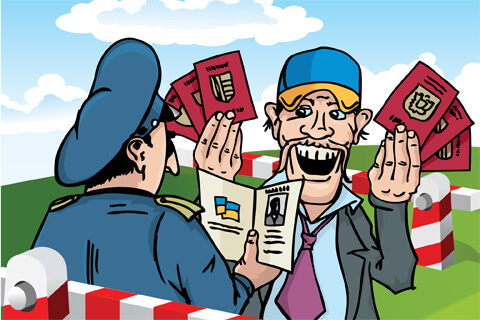 Developed countries are not very glad with an influx of residents of less prosperous countries. As a result, the legislation of most of them treats extremely rigidly to migrants. Even for a residence permit (not to mention a citizenship) a number of conditions mast be fulfilled. For example, the law of Malta does not provide its citizenship to residents of other countries. However, those who wish to get the second citizenship always find a way to fulfill their dream, though using not legal means.

There are many cases of evident fraud (when a swindler having raised money for the service disappears, without their providing), but so-called “crimes without victims” deserve special attention. In these cases, the client suspects that not everything is fair, but with the best of circumstances, he can get a legal passport.

For getting legal passports or ID cards a passport is properly designed, but not supported by any documents and nowhere registered or its obvious forgery is made (correction of stolen documents according to your name or making false forms). The law is broken at some stage (forgery of documents, bribery of officials). However, by virtue of proven schemes a result can be achieved which is almost impossible to be contested in the courts. Communication with clients in this business is in person, not over the phone.

What is to be done?

To avoid becoming a victim of fraud (somebody took money from you and disappeared with it) you should pay particular attention to the contract with the company, which services you decide to use. If the contract on passport or citizenship contains common phrases like “legal assistance”, “advice”, “assistance in gathering documents”, the customer has a real chance to be deceived. In addition, it will be no purpose to apply to court in this case. The company can also received prepayment and not to fulfill its obligations “due to reasons beyond its control”. It can also suddenly be find out that the client’s passport is properly issued but due to any other reasons, it is invalidated.

Be sure to command the services of only those companies that have reliable recommendations. Do not pay the full amount in advance. The rights and obligations of both parties should be in detail spell out in the contract. Be sure to demand inclusion in the contract of points on liability for breach of its obligations by the party issuing a passport.

Citizenship by means of relatives

This scheme operates through (implementation) the Law of Ukraine “On Citizenship”. Swindlers invent a legend according to which the grandmother, grandfather or one of the parents declares actually to be, for example, Greek. Civil Court (if there are several false witnesses) recognizes affiliation of this relative to Greek nationality. On this basis, a birth certificate with the appropriate entry is issued. Then, the process becomes quite legal. Based on the relative’s new birth certificate a client’s birth certificate with a new nationality is also issue.

According to another scheme, a fictitious father is searched. Many countries, including France, Brazil, England, Estonia, Lithuania, recognize the right of birth. That is, if it is proved that your father is, for example, France national, you get its citizenship. The scheme of a fraud is as follows: a mediator looks for one of these countries’ citizen, which could be or has been in Russia nine months before the client’s birth. Then the man bears false witness that he is your real father (the client’s mother, of course, must confirm his words). Then, for a while, (sometimes rather quickly) you get citizenship.

This scheme is also built according to the law on citizenship. According to it, in some countries (e.g. Greece), people who for whatever reason have entered the country without necessary documents can get them on the spot, if they prove their staying here for a long time (e.g. 5 years) . So, if you want to get a citizenship of any country, just after your arriving you go together with members of any community, with which you have agreement, in the police station. There accomplices witness that the person is a member of their community for over five years. Then he gets the desired passport.

Creating so-called “twins” for quick issuance of a second citizenship is one of the rarest ways. The scheme is based on direct contact of Ukrainian passport firm’s workers with employees of the police department of one of the Eastern European countries. It happens in that way. In the passport archives of the police departments a person is searched, who is similar to the client in age, height, hair and eye color and has left the country long ago. Then the person’s photo is glued into the documents which are the basis for issuance of a passport to that person (such documents are not destroyed). The client appeal to police with request to issue him a new passport instead of “lost one”.

Consulting with a lawyer

If such forgery is exposed, imprisonment threatens “the twin”. In other cases ─ confiscation of a semi-legal passport and deportation.

Another scheme is based on giving by many countries a residence permit when purchasing a real estate or land in their territory. After a certain number of years, you will be given the opportunity to apply for a citizenship. Swindlers legalize such a purchase retroactively, and the client receives a passport within a few months.