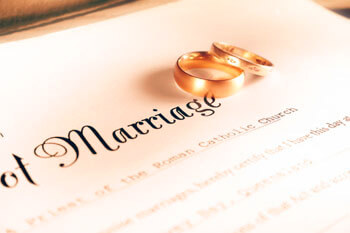 Immigration marriages, particularly when the Russian or Ukrainian girls marry foreigners, have been much sought after these nations for a long time. Immigration marriage begins way back in the mid-nineties. By the end of the 90s a rapid increase in the number of Russian women who married foreigners was observable. The number of women, who were younger than 30 years old, was 60%, the average age was 28 years old.

According to the US Department of Justice statistics, it is counted about 75 thousand Russian women in the last 12 years who have immigrated to the United States as brides of American citizens. Even the book “101 advice on how to marry a foreigner” was specially published, which is very popular online.

More than half of those, who go abroad, are women without higher education. For these girls immigration marriage is very beneficial.

According to the research, Russian women want to marry Americans, French, Germans and Italians the most.
Sometimes women are trying to attract a man by all means through the Internet.

In the late 20th century, the institutions that helped Russians to go abroad through marriage were gradually established.

A lot of people have become rich thanks to the marriage agencies, where generally women applied.

Russian women are increasingly using the Internet looking for lovers from abroad. There are a lot of sites now, where girls hopefully fill up a form, send different photos in order to achieve a foreign prince. Expert forms a feeling that Russian women consider that they can find their happiness only abroad.

Also, some are not as interested in marriage as just to go abroad, and marriage is just a business card to achieve their dreams.

Following the change in Russian society, there have been great changes in the criteria of the women`s helpmate selection.

First of all, Russian girls prefer men who have a high social status. Secondly, it is simple men who should be a good family men, best of all, when the man has any distinctive abilities.

After the marriage, women hope to feel safe, but also they want to have stability in the family.

There can be a bunch of causes for searching your love abroad. It can be unsuccessful marriage at motherland and complete disappointment in local men. It can be successful experience of friends or familiars, because of the listening to their stories about the amenities of the foreigners, many turn on this heat. It can be elementary desire to carve out their life in better way. It is not a secret that the level of life in most countries of the continent is much better than we have.

Experts consider the causes of this phenomenon as a multi-sided, including the big amount of social questions and also problems connected with the economy and population.

It also includes the features of the Russian nation and their culture, population problems in Western countries, as well as issues connected with the psychological and cultural needs of Western men and the degree of the society openness.

A lot of experts think that international marriages, particularly when the Russian women marry foreigners can lead to the wastage of Russian gene, which is equal to the “brain drain.”

Women’s emigration has serious negative social and demographic consequences for Russia, the acuteness of which is amplifying in the conditions of the current demographic situation.

In order to give a quantitative evaluation of these consequences, a sociological study of women was conducted. The sampling consisted of 400 people.

The study revealed that women are most interested in marriage immigration. Approximately half of the women consist the “active migration potential”, i.e. they are ready to leave in the near future and have made real steps for this, such as searching for a foreign husband through online dating sites. Despite sufficiently high migration potential, it can be expected that not more than 10-12% of all surveyed women could truly realize their active migration potential.

In addition, some restrictions impose conditions for travel abroad, for example passport and visa procedures. The objective of most wishing to go abroad is the advantageous marriage, i.e. they are interested in marriage immigration.

If the results of sociological research are extended on the entire female population than about 94 thousand of women are ready to leave the region permanently.

The real outflow of women abroad from the region on the basis of one sixth of those who have made the real attempts to leave then we get a figure of about 15 thousand women, who are preparing to go abroad now.
Taking into account the attitude for the birth of 1-2 children, demographic losses of the region because of failed births and deferred births, according to our estimates, could reach about 38 thousand of children in the next five years.

Extending this approach to Russia, we can talk in general about possible losses of 833 thousand of children as a result of women’s emigration in the next five years. Of course, it is a hypothetical figure, but it bounds to alarm the presence and spread of such a phenomenon. The accuracy of its scale is secondary.