Fraudulent checking the Russian passport is performed not only by law enforcement officers, but by the people being rather far from such activity. Well, for example – a simple and common situation: you want to rent or to rent out an apartment, or even an accommodation. Or you are going to lend a large sum to one honest man vouched by your good friend who “knows him for a hundred years”. In any case, it is highly desirable to know whom you are dealing with – with criminals or with normal people. So, how can you check the passport of the citizen of the Russian Federation?

If you have an access to the Internet, the easiest way is to “run down” the passport – it means to check the passport series and number on the official website of the FMS of the Russian Federation. By the way, on this page you can check not only the passport, but a work permit for migrant workers, an invitation to enter the Russian Federation for foreign citizens.
If the passport is invalid, it is better not to deal with the owner of such a document. However, the very fact that the passport presented is valid does not mean that it belongs to the person presenting it. Maybe it is the fake passport, but with the valid series and number. Maybe this passport is stolen or its previous owner has just lost it, and for some reason has not declared it to the police?

How to verify the authenticity of the passport of the citizen of the Russian Federation? – The very passport is well enough protected from forgery, therefore, passports are rarely counterfeited “from scratch”, and law-breakers are limited to a partial change in the passport.

Most simple and obvious ways of Russian passport forgery

Typically, the law-breakers do not trouble themselves on manufacturing the completely false passports – it is much easier to paste his or her photo in a stolen or lost passport. Of course, the page with the photo is laminated, but it does not stop the criminals. After all, it is possible to paste the photo over the existing one, and re-laminate, or gently to remove the existing photo, paste the new one, and re-laminate, or, alternatively, to produce the entire false page and then paste it over the old one. Therefore, first of all – check the photo carefully, scrupulously. At first glance, is it all right? Check on. Perhaps, criminals acted in other way.

Sometimes the scammers try just to remove some pages from the forged passport and replace them with the pages from another genuine passport. This gross forgery is detected very easily – just compare the series and number of each page of the passport. Obviously, they should not differ. Another sign that the pages in the passport were changed – even the slightest discrepancy in their size. Any page in the passport should not protrude beyond the others.

In addition, any foreign recording marks or stamps are not allowed in the passport of the citizen of the RF. It is obvious that the passport with a stamp “redeemable” is invalid. 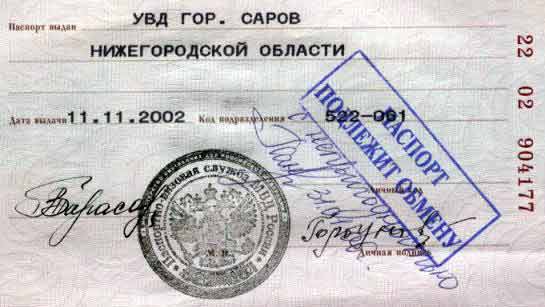 The page with the name and photo should be checked with particular care. The photo shows the main protection elements of these pages. 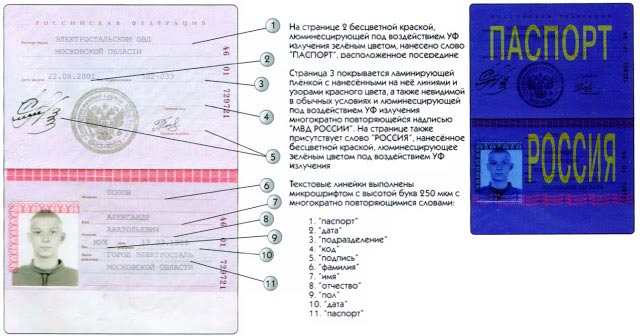 Since 2011 a new cover-up is used for lamination, which is difficult to remove, it has the monogram with the word “RF”, and with the special hologram. 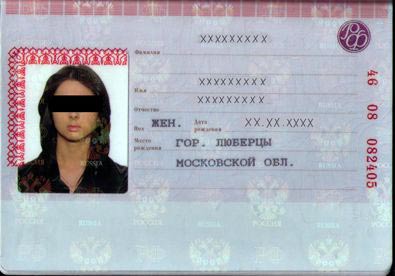 On 1st July, 2011 an issue of new passports started in Russia. The main difference of a new passport form from an old one is a special box with basic information about the passport holder at the bottom under the photo.

In addition, the watermark such as in the picture below must be clearly visible on all pages of the passport when holding to light.

In addition, the document should be checked for various inconsistencies: the date and place of birth, the year of birth, special attention must be paid to the stamp, for example, the fact that the passport was issued by one department, and a stamp of another department is used seems to be strange.

If you have an opportunity you can check a false passport by UV light.

More about such methods of checking can be read here: Security Elements of the Passport of the Citizen of the Russian Federation.

Indirect methods of verification give good results – for example, if the passport has been issued many years ago, and looks as good as new, or vice versa, looks very shabby – it makes think: perhaps the passport was confiscated for the time when its owner was in prison, and was recently returned, and a shabby passport can indicate that its owner led a violent vagabond life.

The page with the residence permit should also be carefully examined- if a person was de-registered at an address and then was re-registered at the same address in a few years – it almost certainly indicates the criminal past of a citizen.

Tell me how to spot a fake internal russian passport easily