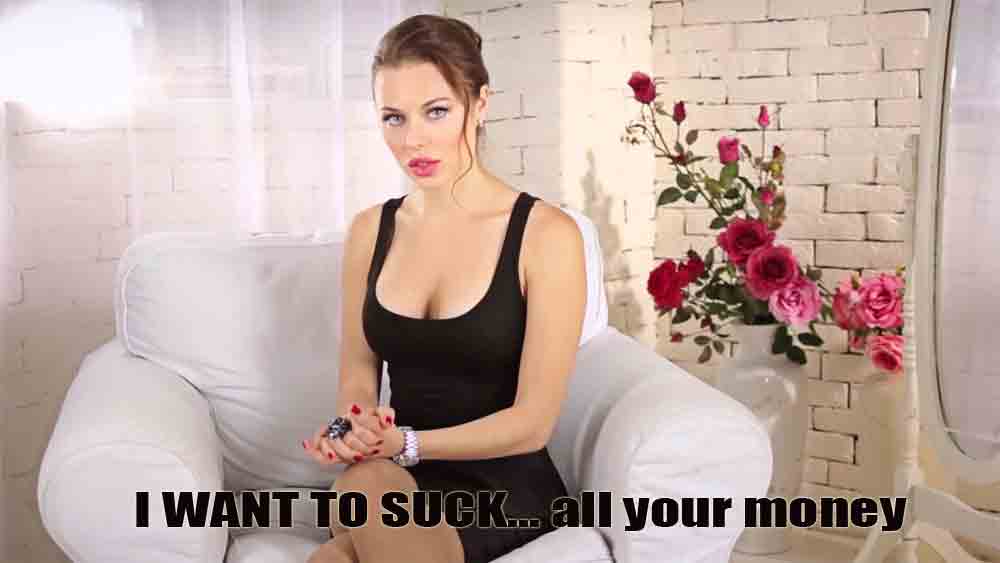 Recently so-called international marriage agencies become very popular in Ukraine. Here young and attractive girls are offered to find a foreign “prince” who will marry and take them into the “Golden Foreign Land”. The idea is not new, but thanks to high-speed Internet it got terrible speed. And today even a small town has at least one such dating websites.

There is countless number of them in Poltava, Ukraine. Either demand creates offer, or there are so many enterprising citizens of Poltava, who have understood the way to “make a fast buck” from naive foreigners. Nevertheless, now it is difficult to find at least one girl who would not be asked in social networks to create an account at one of the agencies. I was no exception.

Once in winter I received a message from a girl, let us call her Tatyana, with the offer of a free photo shoot with a professional photographer. The photo shoot was actually needed for a marriage agency, where you could find interesting acquaintances, or even love.

The latter did not very interest, but the offer to receive the absolutely free professional photo session won. Besides, I have already heard a lot about principle of operation of these agencies, and know that except photos the girls do not get anything else, and it is not any matter of foreign husband.

We agree to meet in a week. For registration on the site a copy of Ukrainian passport is required, so I have to take it along. We meet near the Diamond Plant (in Poltava).

– Now let’s go to my house. It is very cold in the agency, we are working at home for the present, because our translators feel cold, – she smiles.

The apartment was on the first floor of the Khrushchyovka. The apartment is renovated, very light and comfortable. It seems the agency brings good profit. We go into the living room, which also serves as a study. Mauve walls, a white leather sofa, a worktable with a computer and printer. Solid and expensive.

While a copier is buzzing scanning my passport, I try to ask as much as possible about the agency. I asked how many girls actually had got married.

– Already eight girls. And they are married pretty happily. Even some already have children – the employee of the marriage agency tries to convince me.

There is a question going round in my head, namely how much percentage wise of all women registered on the site is that, but I keep quiet.

My passport is scanned. We film on the first take. I fill a standard questionnaire, where I indicate my full name, parameters, eye and hair color, English level, my favorite flowers and other information in this style. A question immediately rises of whether we will communicate with men.

– No, no! Our translators communicate with men, only on your behalf. Just when a long correspondence starts up, I inform you, you come, and we decide what to do next, whether arrange a meeting with a foreigner, or … – the girl says.

– And how often do these meetings take place? – I ask her.

– Differently. We have a girl who has at first not received any letter. She even thought to leave the site. She said it was no sense to stay there. I suggested that she would wait. We have made a new photo shoot for her, and now she travels every month abroad to meet with men. She calls me and says: “I do not know, should I go to Germany this month, or to Spain,” – Tatyana smiles.

We talk just a few minutes about other girls and bout the different cases in the dating agency. Everything sounds like a veiled advertising. We negotiate for a photo session. We assign it a month later, when we will have free time.

We meet after a month on a certain day. According to plan the first is a make-up artist. So we go to her. For half an hour I, painted and almost unrecognizable, and Tatyana were brought by car of Tanya’s husband to a specially rented apartment. A promised “professional” photographer was Tanya’s husband Roman. This “universality” alerted me.

We worked two hours and I changed five dresses in the toilet that served as changing facilities. Then, we were tired and sat on the couch discussing the photo shoot. Tatyana made coffee, so the whole room was filled with aroma of the beverage.

– So, look, – the photographer begins – I’ll edit photos in Lightroom. It’s not Photoshop, but almost the same. I will add beautiful effects.

– E-mail me originals – I say without hiding a surprise, – and I will edit them in Photoshop by myself. It’s not a problem.
– Do you know how to work in Photoshop? O! Will you teach me? – Roman asks clearly serious.

I am silent. Because what can I answer? Without sarcasm – in any way, but my good manners do not allow. After all, he tried.
The next day I got my photos. Of three hundred photos I could find at least five which would deserve attention. But they also needed “tons” of Photoshop. All the rest – the lighting failed, the arms and legs were cut, the composition was curved…

Almost half a year passed after all those events. I did not get any e-mail from Tatyana. Here they did not disappoint my expectations. Or is the matter in failed photos?

Dummy girls are only a part of business

Such metamorphoses and deceptions are only the tip of the iceberg. And the tip is not so annoying, because girls do not pay a penny, so even getting bad photos you grudge the time. But there are more serious frauds with Ukrainian dating websites.

Katya works as translator in one of international marriage agencies of Poltava, Ukraine. According to her, the work is not complicated, just to respond to men’s letters on girls’ behalf. But she has never seen any of these girls, only on photographs. Consequently, most of the information written by the girls is fiction. But nobody cares of this. The most important thing in this business is to get more letters from men because for each letter the agency receives some money, and translator – a percentage.

And the girls, according to Katya, do not wish too much to meet foreign men. The majority agreed to be registered only because of free photos. That is why sometimes funny things happen.

– Once a foreigner was going to come to one girl – Katya said. – He had already bought a ticket, and we expected his arrival. But the girl refused to meet with him. The agency did not want to lose money, because an interpreter of the agency should be present at the meeting. The foreigner had to pay approximately $30 per hour for his services. The agency receives a part of the money, what means that a considerable amount is gathered during a few hours, or even days.

Therefore, in order to make money, they found another girl, someone like that one to whom the foreign bride came. At the meeting he did not see that it was another girl, so spent with the girl a few days. They went to different cafes, restaurants and suchlike and, of course, he paid for everything. As a result, he did not like the dummy girl, he did not want to see her more, and we breathed with relief. After all, if he decided to build further relationship, the deception would sooner or later be revealed.

Later it turned out that such transformations were not uncommon. But they are not always successful. Inna, an interpreter of an another Ukrainian dating website, told of a case where a foreigner noted at the first meeting that a girl to whom he came, and a girl who came to him for a meeting were two different people. He kicked up a row and refused to continue the meeting. Although the agency and the interpreter took a stand that it was one and the same person. As a result, it ended peacefully.

It is unknown how long such business built on naivety and romanticism of foreign men will be around. But more and more Ukrainian agencies appeared with each passing year and it seems there will be no girl in Poltava, who would not have been registered on one of them.

If you got to know a woman from Ukraine, you received a copy of her passport by email and not sure if it is real or fake, we will check Ukrainian passport. In 24 hours you will get the results if the passport number (+ name + picture etc.) are fitting to each other to see if the passport has been manipulated digitally.