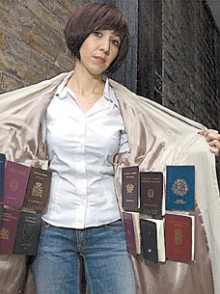 Together with the influx of refugees the business of selling the fake passports flourished in Europe. Illegal immigrants buy documents of the EU countries for just a few thousand Euros with which they can move freely within Europe, as well as live and work. One of the underground syndicates centered in Greece and having a branch in the Czech Republic was recently caught by the Europol.

Five of twenty “craftsmen” were Ukrainians: the leaders of the group came from Sudan and Bangladesh. In addition to the fake passports, they sold fake Schengen visas, residence permits and driver’s licenses.

The biggest demand was for Lithuanian passports, which were the easiest to be faked

The fakers collected lost and stolen documents confirming identity of a person, or buy them from the rightful owners, and then passed them on to Greece for further forgeries. From Greece, the Czech branch got the fake Schengen visa stickers, entered the “customers’” data and pasted into the passports.

The price of a forgery depended on its quality, on average the passport was sold for € 3,000-3, 500 to migrants from Africa, the Middle East and Asia. For the price of $ 6,000 criminals helped the refugees to cross illegally the border of Europe. Now they face up to 10 years in prison.

Citizenship in Europe for 8,000 Euros

In Ukraine, in the meantime, you can freely get a passport of one of the Eastern European countries on the black market – there are a lot of similar ads on the Internet. Prices vary widely from € 2,000 to 10,000. The documents of the new EU members such as Lithuania, Latvia, Romania and Bulgaria are cheaper, Hungarian and Slovakian passports are more expensive. We called on the ad where the Lithuanian passport was offered for € 3,000. The man on the other end offered to transfer the earnest money and the rest after obtaining a passport. There are no guarantees that the money will not disappear.

A real passport is the most expensive. For € 7,000-10,000 the mediators take on “finding” the Hungarian roots for you. (Magyars issue passports to descendants of Ukrainians who lived in Transcarpathia, when it was a part of Hungary). One of these businessmen promised us for € 8,000 to “settle” the issue in the consulate and to issue the necessary certificates.

“For less you can be deceived: you can even lose money, or receive a false passport with which you can be arrested in the EU and be expelled forever”, – the mediator Dmitrii said. He asks for the earnest money of € 200 and a photocopy of Ukrainian documents. Before submitting the documents for citizenship you will have to pay € 4,000, and the rest – before obtaining the passport in the consulate.

Lawyers say: it is a risky venture to buy the EU documents. A lot of people were cheated in such a way. But even if you buy a counterfeit or make a real passport with false certificates, you risk facing at least deportation, and, possibly, a jail term if being caught in the EU.