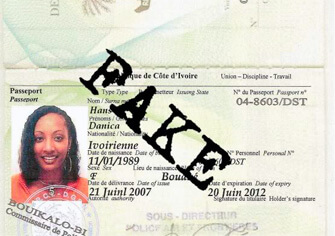 There are a huge number of scams in Ukraine, who speculate by selling fake documents, and often not the best quality. Of course, sooner or later, forgery is detected, bearer is arrested, but those who sold the documents had already hidden. The fake passports are in great requisition. They are bought by lots of crooks, for example, to take out a bank loan, certificate of state structures (for example, the Parliament, various ministries and agencies) and law enforcement agencies (police, FSS, private security, etc.), diplomas and other documents in the field of education (e.g. false documents of obtaining a degree or thesis defense).

Here it should be noted that the sale of fake documents to identify poor quality is not difficult. That`s why, most people who bought fake documents from a private seller, sooner or later come across. And for such a violation of the law, you can easily go to jail. High-quality fake documents occur extremely rare and they are usually purchased from regular suppliers – acquaintances involved in counterfeiting. Only in this case document scammers pay special attention to quality, because the buyer can pass them, if he will be cached.

In post-Soviet countries are working whole-designed scheme of using false documents. For example, the scammer makes a fake passport for the customer, as the payment is requested fifty – seventy five percent from the first fraud to obtain a bank loan. All subsequent manipulations in crediting, the customer cranks by himself, leaving all the profit himself. By the way, there is a catch here too: a significant number of such “pseudo-scam” has come across in the second and third applying for the bank loan.

Not so long ago, one type of fraud has become very popular: the Ukrainian company or organization finds indebted borrowers and offers to “buy out” their credit. Allegedly, the borrower must enumerate twenty or thirty five percent of his credit to the company and it will repay the rest. But after the transfer of funds, fraudulent company makes a few payments and renounces obligations. As a result, the borrower loses the money that he could use to repay the loan and the loan remains on his neck. But such fraud engaged mainly companies that can persuade the borrower to the seriousness of their intentions. Besides, in most cases, it is very difficult to punish and sometimes simply find the company-cheater. But sometimes it manages, and these companies are punished.

Very serious scam document, which are turned in Ukraine and especially in Kiev, is real estate. Fraudsters engaged in this, have already received the status of “the apartment mafia”. These are really big cases. In this scam take part a fraud notary, unfair police, lawyers speculators and employees of social service centers (which are engaged in taking care for the elderly and disabled). This command can very easy take over the apartments of single pensioners and the disabled by means of scam document. Often, fraudsters are not find, or they are find after the twentieth, fiftieth, hundredth of a transaction, when they had stolen millions.

The big publicity, for example, got a case of one notary, through whose hands passed approximately ninety apartments in the capital. This very unfortunate notary received five years in prison and paid about twenty thousand hryvnas to the victims of his scams. He cranked this scam in this way: he cooperate with a law enforcement officer, which collected information about the distressed homes (where alone elderly man died, the owner is missing, and so on); receiving such data, the notary made scam document about the testament, apartments sale, long-term lease and so on. Even if the fraud victims go to the law, the process dragged on for years, and they have virtually no chance to win the case. This is a rare case where the scammers were punished.

“Apartment mafia” often uses social service centers, the employees of which  are tempted to cash in on their frail and lonely wards. They are either trying to persuade the elderly to rewrite the apartment to them personally, or after the death of the pensioner brought forged documents – gift deed, a testament, etc. – and get an apartment, which then resell. Hardly anybody are investigating whether a pensioner really grant the apartment to the employee’s social services, because it’s normal, constantly occurring phenomenon.

Finally it`s necessary to add, be careful and vigilant formalizing any documents and especially when selling a property.