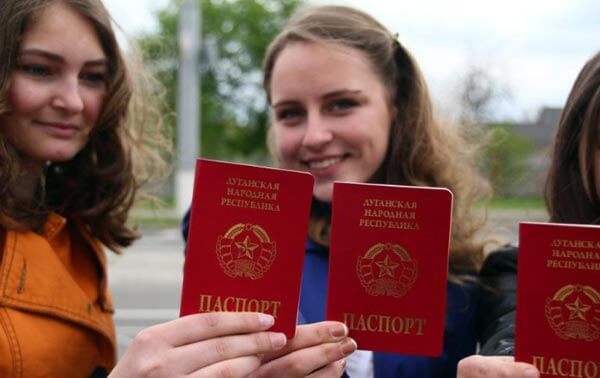 With the beginning of fighting in the East of Ukraine life has not stopped in these areas. Authorities of the fake republics put the most efforts to simulate the state with all its attributes. Facts of birth, death, inheritance, registration and dissolution of marriage are attended with documentation and stamping of the unrecognized republics. It is clear that all these “documents” have no force or effect on the territory of Ukraine, as issued by authorities which do not exist in fact. Records about any legal events that occur in the uncontrolled areas shall not be entered into the state registers of Ukraine, and therefore de jure they do not occur.

One of the areas of separatists’ populism is passporting population

“A passport” of the self-proclaimed republic will not be recognized in any civilized country. Some Medias disseminate information that the Ukrainian passports are seized when issuing the “passport” of the self-proclaimed republics. However, this approach is unlikely to implement by the occupying authorities, because if a citizen loses the Ukrainian passport, he cannot get social benefits, including pensions at least until its recovery. Clearly, if people from the uncontrolled territories do not receive at least some income from Ukraine, they will make the authorities of the self-proclaimed republics provide uninterrupted financing of the population that cannot be done. Therefore, members of the terrorist organizations like the idea of dual citizenship for residents of the occupied territories: they can both keep the Ukrainian passport and get the fake republics. Even the residents of the occupied territories understand: the military conflict will come to an end in the future, and the Ukrainian passport in case of damage or destruction shall be recover.

If as a result of hostilities the Ukraine passport was damaged or lost, a person shall submit to the territorial department of the State Migration Service of Ukraine the following documents in order to obtain a new passport:

We recommend the residents of the eastern region, which failed because of life circumstances to move to the controlled territory, still get the “documents” with the stamps of the self-proclaimed republics. It is not about the separatist “passports” but about various certificates, statements of medical institutions of birth, deaths and so on. These “documents” will be useful in determining certain circumstances in the courts, because there is no ability for legalization of such “documents”.

Courts hear cases without any delay