The prostitution market in Kiev and its owners easily live through changes of power, revolutions, attempts of the European integration and next large-scale programs in fighting against crime and corruption.

And this touchy subject with multimillion-income is very carefully bypassed by officials and politicians who choose simply to ignore it.

Meanwhile, only one public house, there are about 200 pieces in Kiev, consistently brings hundreds of thousands dollars of revenue.

Whereby, people, who are behind the illegal houses of prostitution, have the unique ability to “negotiate”. Due to which, they do not only continue to run their business, but also to open new “legal” institutions for adults around the city.
We will talk about what is the market of “body traders” inside the capital.

Through inaction of the authorities Kyiv has long been considered in Europe a popular destination for a sex tour. And there is no difficulty to find the services for adults. It is enough to enter into a search engine your query, like “prostitutes Kyiv” and select from hundreds of proposals.

But the officials and the law enforcement prefer simply to ignore the problem, do not raise it on numerous late-night talk shows and even do not promise to take to liquidation of the illegal business, which, as in the days of hazy 90ies, is helped to survive with regular bribes.

Meanwhile, in Kiev, the earnings of prostitution (which is officially prohibited in the Criminal Code of Ukraine, and pimps should be punished by long prison terms), according to rough estimates rise beyond 5 million dollars a month.

Despite the illegal status of prostitution this business is not only thriving, but also very well organized in the capital. That, on the terms of anonymity, was said by one of the employees of the Department for human trafficking prevention of Ministry of Internal Affairs of Ukraine, introduced as Sergii.

“Now the prostitution market in Kiev is free. Anybody can open his brothel. The main thing is to know whom to approach and with whom to negotiate. If there are not any contacts, sooner or later, the right people will come to you themselves,” – the law enforcement officer told.

The market is divided into three parts, most of the shadow business is concentrated in brothels, about one-third works on their own risk anywhere, and less than 5% of all city prostitutes are on the road.

“A route is not the bottom. Everything depends on a girl. Who does not want to do it all the time, comes from time to time for earning some money. Someone wants to be able to choose a customer. Both very young “girls” and “experienced women” can be seen on the road. So, Okruzhna and Brovarskii Avenue have already lost their status as the “bottom”, – Sergei said.
But the main money and the greatest number of prostitutes is concentrated today in small brothels, so-called joints. Depending on opportunities of a pimp, from 3 to 10 “girls” work there from 8 pm till the morning sitting in a rented 2-4 rooms apartment in an ordinary apartment building. They provide their services either at the site or go to the customer’s address.

An administrator monitors all the work – answers the phone, takes orders, controls the “girls” and conducts financial affairs. In rare cases a joint expands up to 15 “working women” and “acquires” a full-time security guard and driver. Also, there are entire homes near the capital, where about 40 prostitutes work.

“Small brothels have to rent apartments on a per day basis, if something goes wrong, they can always easily move to a new place. Only a few large brothels can afford to rent an apartment for a long time, which somehow got a guarantee of their long existence” – the law enforcement officer said.

To find such a joint is a matter of 2 minutes, during a short conversation you can find out the price, place of the brothel or give the correct address for the site visit. Overall, the entire process is not much different from the taxi-call.
But despite the ease of the search, the new police pretend that there is not such a problem even forgetting to make demonstrative visits in order to close the “right” places.

And just in Kiev, there are about 2-3 thousand prostitutes, about 200 joints and a dozen of elite institutions for VIP-persons. “An inducement” of new workers is put on a grand scale. It is not difficult to find the pimps in social networks who promise an easy income. 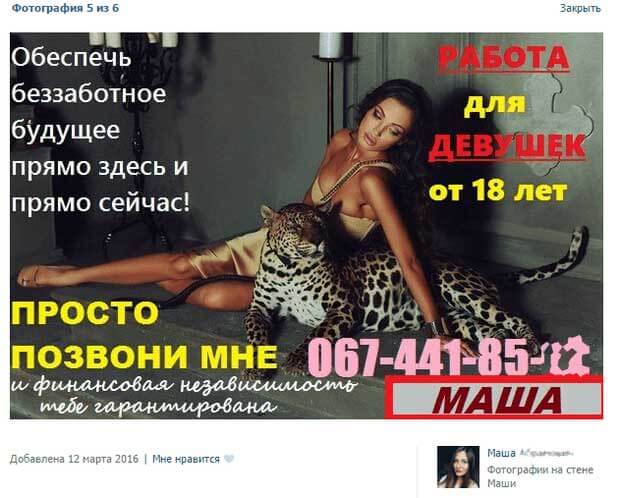 And about 20 pages of the weekly edition of “Work proposals” are full of unambiguous offers of easy and fabulous earnings. All ads have no word “prostitution” and a major luring element is easy money.

Such saturation of the market requires huge infusions in advertising, which is easy to find in nightclubs, saunas, hotels. It is enough to contact an administrator which, at least, will point to stand with glossy booklets. Not to mention a huge number of Internet sites – with a convenient search and girls for every taste.

However, as “the workers” recognize, photos on the internet are very, very rarely coincided with reality, at best, they can only be “archetypal”, only vaguely resembling a girl who attends a call.

The crisis has severely affected the price of the sex services: 3-4 years ago the price per a “work” hour was firmly tied to the dollar. But after the currency jumps the prices have remained in UAH hryvnias at the same level. They start from 300, and rarely exceed 1,000 hryvnias per an hour in the ordinary joints.

At the same time you can find offers from 200 hryvnias of “individuals” on the special sites. The price largely depends on willingness of an owner or an individual girl but it is very difficult to determine the “quality of the service”.

“One day, we covered two brothels; in one prices started from 300, in the other – from 800 UAH/hour, but, frankly, here and there the prostitutes were the same – the girls of average look and age”, – Sergey admitted.

Despite the illegal status, prostitution business is subject to the same rules as legal one. Times of warfare and arrows have gone; the brothels compete with each other by means of balance of the price and quality, said Sergei.

Intense competition forces the pimps ensure that the prostitutes are not engaged in thefts, as well as in “fraud” of their clients. Nevertheless, this is not about any regular medical examinations. In this regard, each girl is left to her own devices.

In addition to the above said, according to the law enforcement officer, almost all prostitutes sit on amphetamines. Some of them start taking the drug against stress and to feel more sexually-unfettered.

The other are hooked by a pimp tying subordinate the girls closer to him. But it is not a question of any physical pressure of the pimp. Basically it is all about the desire to receive higher earnings when a prostitute receives 250-500 hryvnias per one hour of work.